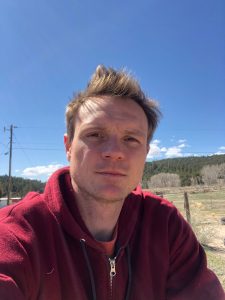 Abe Brown was born and raised in the Bay Area, California, and currently lives in South Taos County, where his mother is originally from. Abe’s passion for nature has been influenced by living in a diversity of beautiful forests from Northern California to Southern Vermont to the Sangre De Cristo Mountains. Abe helped start and build a community garden project in Penasco, NM, and oversees a youth program on a farm there. Abe is earning an Associate Degree of Pre-Science at UNM-Taos and is working towards a B.S. in Forestry at New Mexico Highlands University.