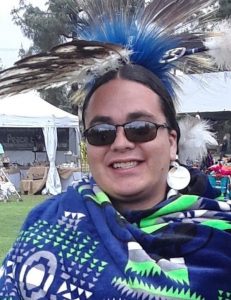 Kenyon is Native American from the tribes of Delaware from Oklahoma and Northern Ute from Northern Utah. Through Native American Powwows and competitions he has had the privilege to travel around the U.S. and the world – including France, Spain, and most recently South Korea – as part of a troop sharing tribal arts. Kenyon is currently attending UNM Taos and actively working to make a better future for himself and his family.